Black Metal is not only a form of music; it’s also a way of life for those who have followed the movement that has origins in England, Sweden, and Norway.  One of the bands that changed the scene and sound of black metal is Mayhem.  Mayhem manifested in 1984 in the heart of Norway (Oslo) and consisted of original members guitarist Øystein Aarseth (Euronymous), bassist Jørn Stubberud (Necrobutcher), and drummer Kjetil Manheim.  After a brief hiatus and a few member changes, Per Yngve Ohlin (Dead) joined as lead vocalist, and a new drummer Jan Axel Blomberg (Hellhammer) replaced Kjetil Manheim. 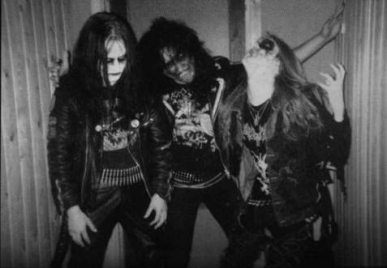 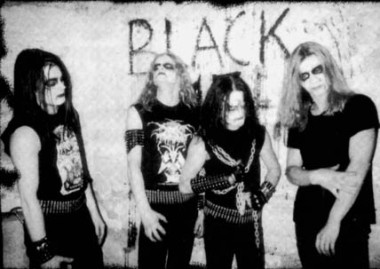 Per Yngve Ohlin would soon resemble his nickname after a short stint as Mayhem’s vocalist from 1988-1991.  The image needed to prevail within the black metal scene was an intense and morbid stage play of antics that would consist of dead animals, self-inflicted wounds, and Satanic imagery.  Known for his anti-social personality and depression, Dead kept a permanent workforce of writing material but started to contemplate his existence as a human or as anything of this physical world.  Maniac depression, illusions, and harrowing childhood experiences became a tipping point for the black metal icon.   Dead’s image wasn’t just a personification of his inner-demons; he is credited with the “corpse paint” facial makeup that has become a mainstay in metal culture and is hailed as one of the best vocalists of black metal.

Dead with and without the ‘corpse paint.’ 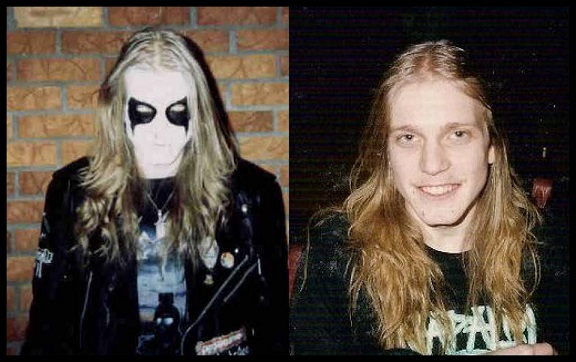 Dead’s friendship and rivalship with guitarist Euronymous are now a tale that haunts Mayhem’s eerie legacy; the fate of these two men signified black metal’s image for years-to-come.  In early 1991, Euronymous and Hellhammer had a house Mayhem often used for rehearsals.  Dead kept to himself and found himself arguing with Euronymous over his usage and loudness of synthesizers.  Along with the depression, Dead had sleep apnea and might have suffered from Cotard delusion.  Plagued by suicidal thoughts and the on-going feud with Euronymous, Dead cut his throat, his wrists and then blew his head off with a shotgun one evening while alone.  Euronymous found the body, and instead of calling the authorities, he went to a store and bought a disposable camera.  When he arrived back, he rearranged the crime scene and took several exploitive photos.

Stories have been passed down through black metal lore that suggests Euronymous ate portions of Dead’s brain in a bowl of soup and made necklaces out of the skull fragments.  The necklace tale has been proven true over time as prominent members of several black metal bands like convicted killer/drummer Bård Guldvik Eithun (Faust) from Emperor has confirmed its credibility.  Euronymous showed the photos to friends and acquaintances, angering many of his close associates; in the days leading to Dead’s suicide, Euronymous had been tempting the depressed vocalist to go through with his suicidal thoughts.

The photographs were ‘stolen’ and used on a bootleg demo for Mayhem entitled “Dawn of the Black Hearts” released in 1995, but it featured recordings from 1990.  After finding a protégé in the form of Varg Vikernes of the one-man band Burzum, karma caught up with Euronymous in 1993.  A ‘betrayal and a game of who could be the ultimate face of black metal turned into a brutal murder when Vikernes drove to Euronymous’ apartment and got into an argument; details vary, but statements given by Vikernes claim self-defense.  Vikernes stabbed Euronymous 23 times, 16 of which were to the back.  He was arrested and charged with the murder of Euronymous and served 15 years; he was released in 2009.  Black metal fans mourn Dead and Euronymous’ deaths but also embrace their dedication to the music and lifestyle. 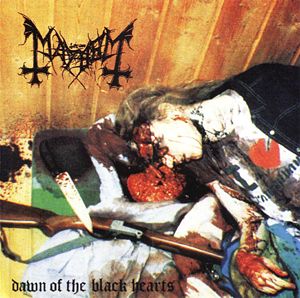 One thought on “Dawn of the Black Hearts (Mayhem, Suicide and Black Metal)”